I’m a writer. I’ve been a writer since I was sixteen. These days I’m thirty five. Applying my amazing skill of mathematics, that means I’ve been writing for nineteen years!

Which is a bit of a lie.

Because there were years I didn’t write. There were busy years in which I wrote very little. All in all, if I’m honest with myself, I’d say I’ve been writing for five years, top.

During that time I’ve published three novels, and had varying experiences which I hope to share in this blog. And I will! But not today.

Today I’ll give the bottom line, which is… I think I’m going with self publishing now.

I’ve been a bit sad lately, thinking about this novel, which I love so very much. I’ve been sad because I knew I need to write agent queries, and send them out, and be rejected. And then, maybe… just maybe… I’ll find an agent. And then he’ll look for a publishing house, and maybe… He’ll find one. And then the publishing house will publish my book, and maybe… it’ll be moderately successful. And then it’ll be out of print, because moderately is just not good enough these days.

And then I stumbled into the world of self publishing. I know, it’s a bit like saying “I found this cool doohickey called an iPhone“, but you have to understand that due to my bad marketing skills, I always ignored self publishing, justifying it to myself by saying I’ll never be able to sell my book. So I ignored this world completely, and just found out about it when reading the blog “A newbie’s guide to publishing (http://jakonrath.blogspot.co.il/) .

I’ll talk about this blog at length, because it deserves it’s own post in my blog that has no readers yet, but for now I’ll just say that it opened my eyes. It made the task of living from writing seem doable. I never wanted to be incredibly successful. I just want to earn a decent paycheck, and apparently, with self publishing there is a chance to get that.

So how do I start? I could just toss “Sleepless” into the amazon self publishing path and see what happens… But then I discovered something else. A new service was just launched last week. Kindle Scout. It’s crowd sourcing the task of finding new books, it’s a pretty brilliant concept, and you can read all about it here: https://kindlescout.amazon.com/

It has another great advantage. It was launched last week. The category of sci-fi and fantasy, which is the category for my novel contains 48 books. Despite the fact that I’ve managed to discover self publishing after the rest of the world did, this was my small chance to be a pioneer.

I called my friend, Shahar Kober, who is a talented Children’s books illustrator and asked if he knew someone who could make a cover for my book really fast. And he sighed and said “Yeah, okay. I’ll do it.” And he did. He asked no payment (in fact he insisted that he doesn’t get any despite my pleading)

Here is the wonderful cover: 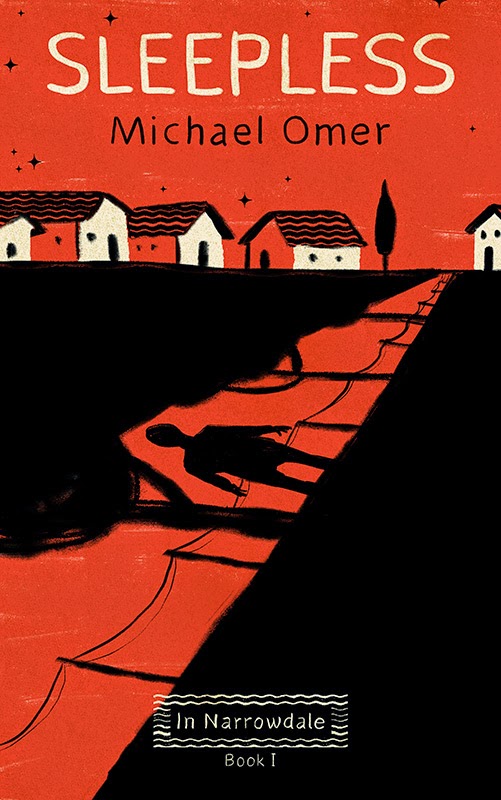 And today I’ve been working on creating a 500 characters summary for my book, a 45 character blurb that describes my book and a 500 character bio.
Here is what I currently have:
summary
Amy knew she’d hate Narrowdale, a boring suburban town. How could it possibly compare to L.A., where she lived her entire life? Being a high school freshman in a new place made things even worse. And that was before she started having the same nightmare over and over again. Before she woke up every night to a shrill whistling sound outside her window. Before she met a homeless man who seemed to know way too much.  Some things seemed to happen only in Narrowdale, where dark secrets were hiding beneath the surface…
Blurb
Either: What dark secrets hide in this suburban town?
Or: Don’t fall asleep. Don’t dream. Don’t get caught.
(It really depends on what I want to accomplish. And I’m not sure what that is)
Bio
Michael Omer is a writer, journalist and game designer. He wrote and published his first novel when he was sixteen, and figured he’d keep at it, why not. Since then, he has published two more novels, and wrote… who can even count how many? He’s happily married to a woman who keeps pushing him to write more, and has three kids who insist he should stop writing and come play with them. He also has two dogs. Let’s not mention the fish. He should really do something about the fish.
And there were additional tasks (making sure the first 5000 words of the book are awesome, changing some chapters, adding a chapter… stuff)
So hopefully I’ll submit tonight. I’m excited as hell.
Share on Twitter
Share on Facebook
Share on Google+